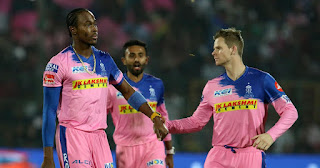 RR have been on a downhill slope after starting the tournament brilliantly with two stupendous wins in Sharjah. Since then, they have lost three out of three.

Sanju Samson and Steven Smith, who were at the destructive best in the first two matches, have now registered three consecutive single-digit scores. The only positive for RR from their 57 drubbing at the hands of Mumbai Indians in Abu Dhabi was the return of form of Jos Buttler . Robin Uthappa needs to contribute in the middle order – he has just managed to muster 33 runs in 4 innings. May be RR need to shuffle their batting order and open with him.

RR’s bowling is still heavily dependent on Jofra Archer. He has picked 5 wickets and also been their most restrictive bowler with an economy rate of 7.1 in the tournament.

RR would hope that a return back to Sharjah would change their luck too.

Here is a look at the RR Predicted XI against DC:

Jos Buttler (wk): England’s premier white-ball batsman found his form back against Mumbai Indians with a sparkling 70-run knock. However, he failed to take his team home as he didn’t get help from the other end. Sharjah has short boundaries with a flat deck and it can be the perfect opportunity for him to go bonkers from the word go.

Yashasvi Jaiswal: The young batsman got two games and failed to leave a mark in both of them. Yashasvi Jaiswal has immense talent to score quick runs. He just has to spend some time in the middle to found his rhythm back. In Buttler, he has the perfect partner to allow him some time. Another failure will bring uncertainty over his selection.

Steve Smith (c): Rajasthan skipper started his tournament with two fifties and both of them came at Sharjah followed by failures in all the other games. He is not a batsman whom the opposition can keep quiet for long. Steven Smith must be itching to get on the field and score important runs for his team.

Sanju Samson: Similar to Steve Smith, Sanju Samson, too, started the season with two blitzing knocks at Sharjah but failed at the other venues. His six-hitting ability was on display in both of those matches. Samson has to fire for his team to get back on track.

Mahipal Lomror: The middle-order batsman played a crucial knock of 47 runs against Royal Challengers Bangalore. Mahipal Lomror is to gel a rather fragile middle-order well to avoid a repeat of Mumbai Indians game. Also, he needs to score runs as well to keep his place safe in the playing XI.

Rahul Tewatia: Rahul Tewatia has certainly registered his name in the IPL folklore with ‘that knock’ against Kings XI Punjab. He turned the tables pretty quickly that night to play a match-winning knock. Apart from doing well with the bat, he is constantly contributing with the ball as well. Tewatia has to replicate his heroics to take his team over the line against Delhi on Friday.

Jofra Archer: Jofra Archer has been Jofra Archer so far in the IPL 2020. Wicket taker. Economical with the ball. Tonker with the bat at death. Archer has to fire against Delhi for his team’s chances to win the game. Another similar outing is expected from him.

Tom Curran: England all-rounder Tom Curran is in decent form. He is bowling well at the death overs apart from occasional slip-ups. The game against Delhi can be his last game as Ben Stokes will be available from thereon. Hence, he has a point to prove before Stokes’ arrival. If he does well against DC, Curran can pose some tricky headaches for the team management.

Shreyas Gopal: He is the best spinner in the Rajasthan bowling arsenal. Shreyas Gopal has found the rhythm back after going for some runs in the first two games at Sharjah. He bowled well against Mumbai despite his team’s failure to cross the winning line. The game against Delhi will be his litmus test keeping the short boundaries in mind.

Varun Aaron: Ankit Rajpoot went for some runs against Mumbai and he is likely to make way for Varun Aaron, who hasn’t played a single game in the IPL 2020. Aaron had a poor season last year, where he featured in just five games and managed only four wickets. He will be looking forward to leave last year’s disappointment behind.

Kartik Tyagi: The promising youngster made his IPL debut against Mumbai and dismissed Quinton de Kock in his first over. Karthik Tyagi bowled with fire the other night and grabbed the eye balls of cricket experts. It will be interesting to see how he will fare against Delhi’s experienced batting lineup.